A SHORT HISTORY OF GUNDAROO HALL

The Gundaroo Hall (formally known as the Gundaroo Soldiers Memorial Hall) was built during the mad phase of roller skating that swept Australia during the last decades of the 19th century. Roller skate fever was responsible for many large  public buildings throughout eastern Australia because it required  large open spaces  and specially laid wooden floors. Many of these halls became picture theatres, public halls and Mechanic’s Institutes as people’s focus shifted.

The humble Elite Skating Arena was built in 1890, taking all of six weeks. The land was bought during the 1860s by William Affleck, a notable local MP who was responsible for much of Gundaroo’s early infrastructure.  He saw the need for a more robust and larger meeting space than the many smaller hovels around and financed the building of the Hall.  Sitting on timber stumps, with a corrugated iron roofed and rough-sawn shiplapped timber, the  building has worn out two floors, the roof and much of its facade.

As the village grew  the Hall was expanded several times, with the stage and change rooms added in 1908.  Gas lamps and then electricity were installed and in 1977 a supper room was created by boxing in the side veranda as a draught relief project.

While initially privately owned and operated (with two Ladies Only skating nights), the Hall eventually became managed by locals with a board of Trustees set up in 1932. It was also dedicated as a Memorial  in the same year to honour the war dead of WW1. In more recent times it became community-owned and operated.

It’s faced many challenges over the years with dramatic white ant damage, public neglect and the collapse of insurance company HIH leaving it un-insured. Since the 1990s it’s had its misfortunes reversed with a modernisation of amenities, the remediation of damage and the creation of outdoor spaces and landscaping. It now has a commercial kitchen, a digital cinema and a wide range of hire equipment.

The Hall has a firm future. It owes its survival to the many people who’ve sensed that the Hall is a vital part of the community, and who’ve been willing to donate time, effort or money to its upkeep. It’s estimated the Hall Committee and volunteers, together with the Yass Shire Council Community grants, have raised more than $150,000 since the 1990s, with more than $20,000 in donated materials. The Current committee has a mix of village and district members, and meets monthly.  Highlights of the last five years development plan have been the replacement of the roof,  the refitting of the front awning while reinstating the 1930s colour scheme, and the new rear pergola made from timber recycled from Gundaroo’s historic Allen Truss Bridge.

This is great…tell me more.

Some of the  works on the back of the Hall, roof work and a new rear pergola was made from timber recycled (held by plates shown below from Gundaroo’s historic Allen Truss Bridge). 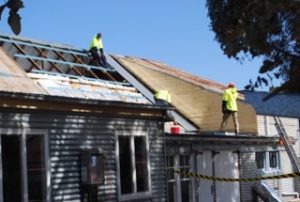 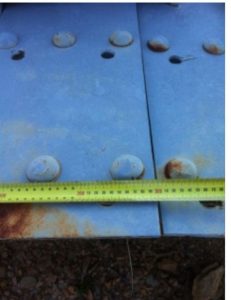